I had a great evening at Makers’ Guild meet-up on Making and Wearable Technology at C4CC in Kings Cross. As the event title suggests, it was an evening of talks around various aspects of wearable technology. Fiddian Warman was our genial host on one of the hottest days of the year and kept us cool with a selection of chilled beverages.

First up was Camille Baker, who is a media artist, curator and researcher, currently lecturing at Brunel University. She gave a compelling talk on ‘Hacking the Body’, a project that looks at the convergence of biosensors, wearable technology and performance. Her research looks at repurposing hacked data from sensors on around the body for performance and installation. Camille also showed some other examples of research, such as the Phillips SKIN project, which looks at emotional sensing via ‘soft technology’ garments.

Second up, was myself. I gave a rambling introduction to wearable technology from early examples, such as abacus rings of the Qing Dynasty (1644-1912) to the influence of science fiction, with some ideas from Star Trek that have come to fruition in real life, to cyborgs and ethics. I also spoke about how Makers have become involved with wearable tech in terms of making and also teaching and passing on skills. Finally I showed examples of my two latest wearable tech projects, the Baroesque Barometric Skirt and EEG Visualising Pendant.

Third up, was Alex Glowaski, who is a curious Hacker and Maker from San Francisco, she gave a great talk about ‘NFC (Near Field Communication) for Wearables’. Alex compared the technologies of RFID (Radio Frequency Identification) and NFC for using in wearable tech, plus also gave some info on other tech such as Bluetooth and QR codes. The highlight of Alex’s talk (for me) was a user case and video demonstrating her Cheer Follower fitness tracker which uses NFC – I’m looking forward to hearing news on how this exciting project progresses.

There followed some interesting Q&A before decanting to the pub for excellent conversations and swapping info on projects and ideas. Thanks very much to Fidd for organising, Camille and Alex for being fabulous, to C4CC for hosting and to all the lovely people who came along.

3D printers have been around since the ‘80s and Chuck Hull of 3D Systems Corp is credited with building the first working machine, he coined the term ‘stereolithography’ a method of printing material one layer on top of another to form an object. I encountered my first RepRaps and MakerBots at Newcastle Maker Faire four years ago, printing out tiny chess pieces and other miniaturised objects. I’ve since encountered them on a regular basis and have learned to love the sound of the RepRap singing to me in a quiet room. For me as an artist, the possibilities of 3D printing are very exciting and I’ve been keeping watch for examples of how other artists, engineers and designers are using this technology as well as contemplating how I could incorporate 3D printed parts to my own work.

If you haven’t been taking much notice of 3D printing lately, the originality, stylishness and innovation of work made with this technology has leapt leaps and bounds in a short space of time and will no-doubt change the way we approach designing and selling an almighty range of objects. For wearables, the possibilities are so exciting, from enclosures for electronics, interlocking items, delicate jewellery, handbags, assistive technology, dresses, shoes, spectacle frames, bikinis – the list seems endless – made from intricately printed materials in complex forms, for example, mesh, interlocking shapes, chainmail, wonderfully organic configurations and digital fabrics. The availability of different kinds of strengths and textural qualities of materials to choose from is also a boon – from hard, polished or brittle to more flexible nylon plastics, to edible foodstuffs such as chocolate!

Being able to print one-off designs or small runs of objects is excellent for start-ups, small companies, one-person-bands and those who would find the usual process of manufacturing too expensive and prohibitive, plus and for artists like myself it gives a whole new medium of creating that I didn’t have before. For consumers it will give much choice in the form of customised products to buy and enjoy. It has also been announced recently that 3D printers will be appearing in schools as part of the UK secondary school curriculum, which will have an amazing influence on the work of future artists, designers, architects and engineers!

To celebrate this exciting medium, here are some of my favourite examples of usage of 3D printing in wearables. Iris van Herpen’s work is amazing, have a look at her website if you get the chance, she’s inspired by the forces of nature and works with a multitude of different materials and textures. I really like her organic and boggling 3D creations, some imitate crazy, unworldly bone structures, others such as her latest Stratasys Connex shoes remind one of polished tree roots!

Industrial designer, Ron Arad, has been working with 3D printing since 1999, producing jewellery, vases and lighting. He’s designed a range of one-piece spectacle frames, which have gill-like sides for hinges, for pq eyewear’s Springs range. The specs are made using a technique called selective laser sintering (SLS), where mass is built up in layers from polyamide plastic powder, liquefied and fused together with a laser. These stylish specs really make me want to have a go at designing my own!

I’m still in awe of the Shapeways in collaboration with Continuum Fashion’s N12 (Nylon 12) 3D bikini that I blogged about back in 2011. What made this so amazing for me was that it was designed using a specifically written algorithm for Rhino 3D CAD software to create the structure of the 3D printed fabric. The algorithm uses a ‘circle packing’ equation on an arbitrarily doubly curved surface. The size of the circles are made in response to curvature and edge conditions of the form to create smooth edges. The bikini parts are still available for order from Shapeways, and of course is customisable in terms of size.

Designer Michael Schmidt and architect Francis Bitonti in collaboration with Shapeways created a breath-taking nylon dress for Dita Von Teese. The dress was designed on Rhino 3D CAD and is constructed from 3000 articulated joints in a netted structure which allows for movement of the wearer. By applying spirals based on Fibonacci’s Golden Ratio theory to a computer rendering of Dita’s body the dress was a perfect fit for her body. The components were made using the selective laser sintering (SLS) method mentioned earlier. 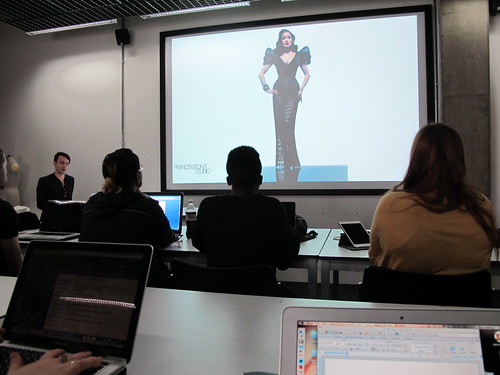 Jake Evill’s Cortex exoskeleton was created to protect injured limbs and body parts, and are custom made from x-rays and 3D scans rather than casts. The exoskeleton aims to be more comfortable and hygienic than traditional casts as they’re lighter, washable and recyclable, plus they look rather cool.

Bespoke Innovations make ‘Fairings’ coverings for prosthetic limbs that are tailored using 3D scanning and allow for all sorts of personalised customisation from various polished materials to etched or embossed tattoos, graphics, texts – which look fab and give existing prosthetics a whole new aesthetic.

These are just the tip of the iceberg in terms of amazing things to come from 3D printed wearables, I’m very much looking forward to seeing what turns up in terms of implantable medical objects and wonder how far away the possibility of printed organs will be!

For those wanting to make use of 3D printing in their work, one requires a 3D model or an app to transform a 2D drawing to 3D and access to a 3D printer of course. Entry level printers are relatively cheap to buy, you can currently pre-order a Velleman K8200 from Maplin for £699.00 (yep, they see the potential of the Maker movement!), a MakerBot Replicator 2 will set you back $2,199.00 and a RepRap Prusa Mendel kit £499.00. Obviously, 3D printers vary in the quality and intricacy of what they can make and prices of the printers get a lot more expensive at the commercial high-end of their capabilities.

Of course not everyone has the spare time to lovingly build and maintain a 3D printer, or the cash, space, or manufacturing needs to own one permanently, so access to 3D printers can be achieved via local hackspaces or one of the many 3D printing meet-ups and groups around the UK. For those who don’t own or have access to a 3D printer and would rather send off their designs to be made, then US company Shapeways will print your objects and mail them to you. I’ve been experimenting with some frame designs and enclosures for my EEG Visualising Pendant. It’s very easy to use the Shapeways site to order printing and if you’re just starting off their 2D app to transform a drawing into a 3D object is very straightforward. My novice tips for making / uploading designs would be to not make the walls of your design too thin and watch out for bits of your design that are simply floating, i.e. not attached to anything or not ‘watertight’ – everything needs to be closed! For example my, thin hypotrochoid line drawings did not work out as a printable object as when turned into 3D the lines were simply too thin to be printed as walls.

Example of one of my 3D printed frame models

Here’s the printed frames on my EEG Visualising Pendant

There’s also a varied selection of materials and corresponding prices to print from, ensure you read about and compare materials before you select as they have different properties, strengths and suitabilities. Shapeways charge you by the amount of material you use, so bear that in mind when contemplating creating large objects!

You can also use free modelling apps to build 3D objects, such as Blender, Autodesk, SketchUp and Sculptris. Once you’re happy with your design or object you can upload it to your account, where after selecting materials it’ll have to pass a couple of quality assurance hoops, which are useful as they help you spot duff designs and weaknesses before printing. Whilst you’re waiting on your order approval you can peruse and buy amazing work by other designers which could turn into a addictive pastime!

Some of my ‘Kittyspirals’ 3D printed pendants – image Rain Ashford